'White Ribbon' to vie for an Oscar (The Hollywood Reporter) 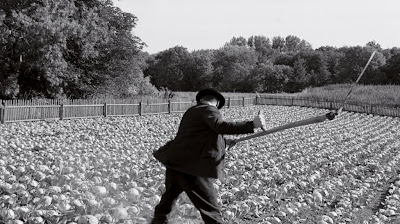 A small-town tale of morality, depravity and the rise of fascism set on the eve of World War I and shot in stark black and white, "The White Ribbon" marks Haneke's return to his native German after a decade of success in French.

If nominated, it will be a first for the Austrian director, who enjoys auteur star status in Europe but has yet to break through in the U.S. Sony Classics is releasing "The White Ribbon" stateside, with a February bow planned, following the obligatory pre-Christmas Oscar qualification run.

A nomination would also be a first for German producer X Filme Creative Pool, which despite being the driving force behind films such as "Run, Lola, Run" (1998) and "Goodbye, Lenin!" (2003), has yet to receive an Oscar nom for one of its in-house titles.

"The White Ribbon" was set up as a four-territory co-production together with France's Films du Losange, Austria's Wega Film and Lucky Red of Italy. This pan-European approach is typical for Haneke but it has proved a liability in past Oscar campaigns.

The director's well-received Cannes Jury Prize winner "Cache" (2005) was rejected by the Academy of Motion Pictures Arts and Sciences because the film, submitted by Austria, was in French not German. The Academy has since changed its rules to accommodate more polyglot productions.

The Academy will announce the best foreign-language film nominees on Feb. 2. The 82nd Annual Academy Awards will be held March 7.