Seinfeld: They're Back (Entertainment Weekly) 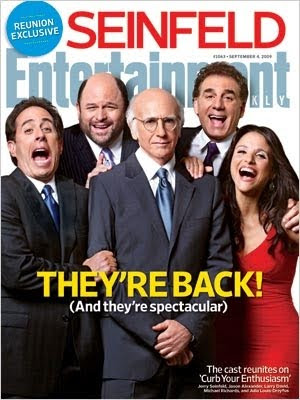 When Larry David approached Jerry Seinfeld about the "Seinfeld" cast reuniting on HBO's "Curb Your Enthusiasm" this season, one thing the revered comic did not say was "whatever."

"The idea of working with Larry was just too overwhelmingly appealing to me, and ['Curb'] is such a great show," Seinfeld told Entertainment Weekly. "There was a little part of me that said, 'Do we really want to tamper?' . . . But to hell with it. How much damage can you really do?"

But Michael Richards was still sensitive to public exposure after the 2006 incident when he let loose with racial slurs during a stand-up set at L.A.'s Laugh Factory.

"It was kind of like I had open-heart surgery," he says. "I'm kind of grateful that I blew it because it let me step into another place with myself and the world around me."

Ultimately, he was game.

"I just knew we'd get the job done. If we're all in place, it's going to happen."

Seinfeld says: "It was kind of nice to soothe him a bit, and bring him back to the place that he always felt so good in."

The story line starts in episode 3, airing Sun. Oct. 4 at 9 p.m., and is sprinkled over five of season's 10 episodes. Larry recruits the cast for a "Seinfeld" reunion as the actors play versions of themselves preparing for the reunion show.

"Larry attempts to get Cheryl back, and the 'Seinfeld' reunion figures prominently in that."

On "Curb," the cast gives David heat for a finale that many fans hated. The real David says: "I realize that many people had problems with [the finale], but I thought it was good. I thought I made one mistake: I wouldn't have them being so cavalier when they saw the initial mugging. I would have them be more cowardly than cavalier."

Producers hunted down the sets for Seinfeld's apartment and the Monk coffee shop. Both had to be spit and polished. New fixtures, like a refrigerator, were added since the old one was missing as was Seinfeld's front door.

But the familiar environment helped the cast get in the mood. The first scene they shot had them trying on their old characters.

"Just before we shot that scene, I said to Jerry and Julia, 'I don't know if I can be George. I haven't tried him on for awhile, ' " says Alexander.

"And it was freaky how it just came right back out."

I’m so looking forward to Jerry´s total return to television!
I´ve found that NBC has told Jerry he could write his own check by bringing another sitcom to the network, and if he has success for five years; he would be pocketing an astounding $1 billion through salary and syndication. This time, he´ll be doing hour-long episodes dealing with marital interaction.
I’ve found information about entertainment on the site: Yellow documents. They’ve a lot of document types from different subjects.
Lyd