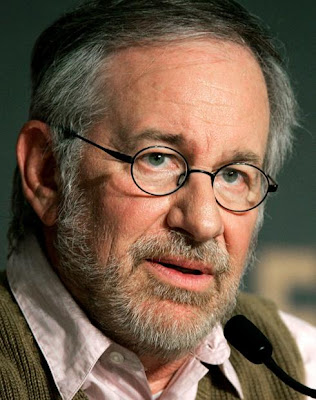 The men who brought dinosaurs back to life in Jurassic Park are teaming up again, though it's a bittersweet reunion since one of them is no longer here.

Steven Spielberg is developing a film out of a posthumously published novel by the late Michael Crichton—Pirate Latitudes, an adventure story set off the coast of Jamaica in 1665.

Screenwriter David Koepp, who adapted Crichton's novels for Jurassic Park and its sequel The Lost World, also has signed on to create the script. Spielberg plans to produce and is considering directing.

DreamWorks Studios describes the novel, set for release Nov. 24, as the story of "a daring plan to infiltrate Port Royal, one of the world's richest and most notorious cities, and raid a Spanish galleon filled with treasure."

"It's a mission movie, and we see it through the prism of what it might have been like to live on the island during that time," says Stacey Snider, Spielberg's partner in DreamWorks and the company's co-chair and CEO.

"Anything that Michael wrote, Steven would be keenly interested to read. But without Michael knowing it, or even me knowing it, it turns out Steven always wanted to direct his own pirate film."

Coincidentally, DreamWorks is beginning a new distribution deal with The Walt Disney Co., which rejuvenated this genre with Johnny Depp and the Pirates of the Caribbean films, another of which is planned for 2011.

Snider says these swashbuckling movies won't clash because Pirate Latitudes will be more grounded in reality, as opposed to the supernatural fantasy of the Disney films. "We would only pursue this if it was wonderful in its own way, and didn't interfere with their films," she says.

DreamWorks plans to wait for Koepp's script before setting any formal schedule for the project. "This is a reunion movie that taps into all three of them, and their love of high adventure. Just like old times," Snider says.

When Crichton died last November from cancer, Spielberg noted that their friendship went back to the early '70s, when both were new to Hollywood, just beginning their careers. Along with Jurassic Park, they developed TV's ER together and the tornado movie Twister.

"Michael wrote a real page-turner that already seems suited for the big screen," Spielberg said of Pirate Latitudes. "Michael and I have had almost two decades of solid collaborations. Whenever I made a film from a Michael Crichton book or screenplay, I knew I was in good hands. Michael felt the same, and we like to think he still does."