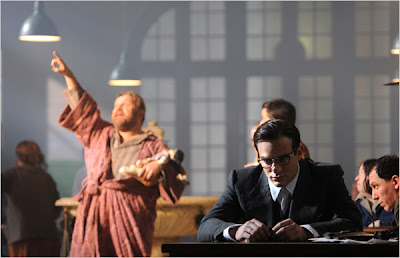 The film director Roland Joffé, who has yet to regain the acclaim he won a generation ago for “The Killing Fields” and “The Mission,” is shooting a movie in Argentina focused on the founder of Opus Dei, an elite and powerful organization within the Roman Catholic Church.

The film, “There Be Dragons,” set during the Spanish Civil War, weaves fictional characters created by Mr. Joffé with the story of St. Josemaría Escrivá de Balaguer, the Spaniard who founded Opus Dei and was canonized by the church.

The project was initiated by a member of Opus Dei, is partly produced and financed by the group’s members and has enlisted an Opus Dei priest to consult on the set. News of the project has set off criticism among some former Opus Dei members that the movie will be little more than propaganda for the organization. But Mr. Joffé, in the first interview he has given about the film, said that he had been given complete creative control and that Opus Dei never had any influence on the project.

He ditched the script he was originally given, he said, because he did not want to make what he called a “biopic” about Escrivá’s life. But, he added, he was intrigued by Escrivá’s ideas about the power of forgiveness and the capacity of every human being for sainthood. Opus Dei — the name is Latin for work of God — teaches that ordinary work can be a path to sanctity if the believer maintains a demanding regimen of religious practices intended to achieve holiness.

“I was very interested in the idea of embarking on a piece of work that took religion seriously on its own terms and didn’t play a game where one approached religion denying its validity,” Mr. Joffé said.

When pressed, he called himself a “wobbly agnostic” but added, “I do believe that rigid atheism is a rather intellectually short-sighted position.”

The Opus Dei members behind the project were delighted to enlist Mr. Joffé, whose reputation was that of a political leftist who made films that asked profound ethical questions.

In the 1980s Mr. Joffé was nominated for Academy Awards as best director for “The Killing Fields,” about the genocidal war in Cambodia, and “The Mission,” about Jesuit missionaries who try to defend a South American tribe from Portuguese slave traders. But his career has sputtered since, with movies like “The Scarlet Letter” and “Captivity,” a horror movie, earning him nominations for the Golden Raspberry Awards, which honor the worst of the film industry.

Mr. Joffé’s portrayal of Escrivá’s actions during the 1930s is likely to be provocative, especially in Europe. Some historians have accused Escrivá of collaborating with Franco. Mr. Joffé said he concluded after doing extensive research that Escrivá had been eager to avoid doing anything that would jeopardize the church’s position in Spain.

“Josemaría himself left Spain, and basically stayed out, and my sense is that he didn’t agree with and didn’t want to get involved in politics at the time,” he said.

Opus Dei has received tremendous publicity in recent years, most of it negative, from “The Da Vinci Code,” the 2003 novel by Dan Brown, and the 2006 movie based on the book. In both, Opus Dei, which claims more than 80,000 priest and lay members worldwide, is portrayed as a murderous cult whose members flog themselves with whips and wear barbed chains around their thighs.

Some members do practice what they call a mild form of “corporal mortification.” But what has made the group even more an object of suspicion is that some of its members do not readily identify themselves as such, and occupy influential positions in business, politics and other professions.

Heriberto Schoeffer, an independent film producer in Los Angeles and a member of Opus Dei, said he first conceived of a film dramatizing the life of Escrivá after reading a book about his escape over the Pyrenees during the Spanish Civil War. “All I wanted is for people to see a good side of him, because so many bad things are said about him and Opus Dei,” Mr. Schoeffer said.

With financing from a friend who is also an Opus Dei member, Mr. Schoeffer contracted a screenwriter, Barbara Nicolosi, a former nun and conservative Catholic who started a training program for Christians in Hollywood. She said in an interview that it took her two years, and three research trips to Spain, to write the script, an “Indiana Jones adventure story about a guy who was motivated by Jesus.”

Mr. Schoeffer said that he showed the script to Hugh Hudson, the director of “Chariots of Fire,” who thought the screenplay “smelled pro-Franco, so he didn’t want to do it,” and then brought it to Alejandro González Iñárritu, the Mexican director whose films include “Babel” and “21 Grams,” who found it too complicated.

Mr. Joffé also turned it down initially, but he said he reconsidered after he saw video of Escrivá answering a question from a Jewish girl who wanted to convert to Catholicism. Escrivá told her that she should not convert, because it would be disrespectful to her parents. “I thought this was so open-minded,” Mr. Joffé said.

In writing the new script, Mr. Joffé came up with a convoluted plot in which a young journalist discovers that his estranged father has a long-buried connection to Escrivá.

To perform research, Mr. Joffé traveled to South America, Spain and Italy. Mr. Schoeffer, who has since left the project, said they met in Rome with two prominent members of Opus Dei: Joaquín Navarro-Valls, who was the Vatican spokesman under Pope John Paul II, and the Rev. John Wauck, a priest who is a professor of literature and communication of the faith at the Pontifical University of the Holy Cross, in Rome. (Father Wauck is now the on-set adviser).

The financing of about $30 million came from about 100 investors, and raising it was a struggle, said Ignacio G. Sancha, the lead producer, a Spanish financier and lawyer who is also a member of Opus Dei.

The film’s backers are not avoiding controversy, and may even be anticipating it. They have hired Paul Lauer, the publicist for Mel Gibson’s “Passion of the Christ,” another religious epic with a no-name cast and a big-name director, which cashed in on all the attention it generated.
Publicadas por Peacock a la/s 3:45 p. m.

I recently came across your blog and have been reading along. I thought I would leave my first comment. I don't know what to say except that I have enjoyed reading. Nice blog. I will keep visiting this blog very often.