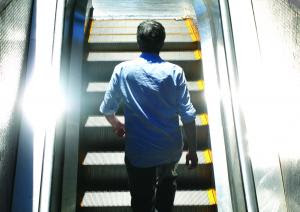 A sneaky, frantic and smart creation from the filmmaking team based at Buenos Aires shingle El Pampero Cine, "Castro" is a genuinely original (and oh-so-loose) variation on Samuel Beckett's novel "Murphy," in which a neurotic husband tries to get away from his wife. When they're not running at full gallop through much of the film, they're talking at nearly the speed of light, all of which compounds the rush of heady absurdity that will distinguish writer-director Alejo Moguillansky's film in the international marketplace. Top prize at the Buenos Aires fest will hardly hurt its prospects of breaking beyond local-cine haunts.

If the previous El Pampero project, "Extraordinary Stories" (which Moguillansky edited for director Mariano Llanas, who produces here), drew on fiction writer Adolfo Bioy-Casares for inspiration, "Castro" pulls as much from the early action movies of William Friedkin and the films of Jacques Rivette as it does from Beckett, to create an absurdist effect with high-wire tension.

Moguillansky preserves a central conceit from "Murphy": a set of characters who are in constant motion in pursuit of a title character who would just as soon check out of the rat race and sever ties with his past. The difference here is that Castro (Edgardo Castro) is no longer Beckett's inert, static hero; he's running from the first frame, chased by a bunch of guys hired by peeved wife Rebeca Thompson(Carla Crespo).

The giddy sensation of watching characters inexplicably running full-speed through busy city streets, sometimes involving difficult stunt maneuvers (supervised by choreographer Luciana Acuna), is like experiencing a postmodern Mack Sennett two-reeler filtered through Rivette's "Celine and Julie Go Boating." The more extended the pursuit, the funnier"Castro" becomes, and it's fair to assume most auds won't have seen anything quite like it.

Underlying the antics -- which involve some car stunts that must be seen to be believed for their charming, non-CGI appearance -- is the sad tale of a man who's convinced that he's through with his wife, and that he'll lose his sense of identity if he gets a job. Among his many issues, though, is that g.f. Celia (Julia Martinez Rubio, the unofficial star of El Pampero's little cosmos) demands that he land one, or else she'll dump him.

Nobody, on the other hand, messes with Rebeca, who bosses around a motley crew of hapless underlings charged with finding Castro: Acuna (Esteban Lamothe), hopping around on crutches; Willie (Gerardo Naumann); and Samuel (Alberto Suarez), whose nefarious secret messages are part of the film's nonplot "plot," designed by Moguillansky to make a mockery of movie plotting itself.

True to Beckett, little changes in the end -- how could it? -- but the final images could become a classic moment in contemporary Argentine film.

While Argentine listeners who know the cast members from their many notable stage appearances will enjoy the ultra-rapid-fire line deliveries (frequently at a persistent monotone Rubio and Crespo have totally mastered), non-Spanish listeners will have to work hard to keep up with the subtitles, but no more than with some of those talk-filled stretches in Eric Rohmer films. Cast is aces up and down the line, with Castro's Castro a melancholy portrait of a modern man yearning for some kind of escape.

Projected vid image was a bit blown out, but Gustavo Biazzi's lensing comes through beautifully nonetheless. Ulises Conti's piano-based score has its vital cues, and some that are a bit twee.