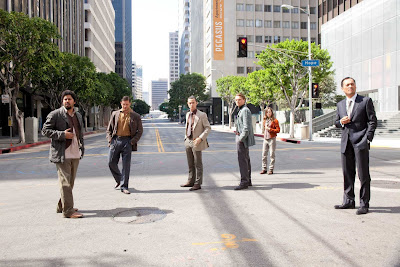 "Too literal-minded, too caught up in ticktock logistics, to make a great, untethered dream movie."

"Like Nolan, the dreamweavers work from their movie memories (the center of Fischer Jr.'s labyrinth is the intersection of Citizen Kane and 2001) and narrative formula. Planning how to get through to Fisher Jr., one conspirator, who's obviously attended a few screenwriting seminars, offers: "The stronger the issues, the more powerful the catharsis."

"This may be a movie about dreams, but there’s nothing dreamlike or evocative about it: Nolan doesn’t build or sustain a mood; all he does is twist the plot, under, over, and back upon itself, relying on Hans Zimmer’s sonic boom of a score to remind us when we should be excited or anxious or moved. It’s less directing than directing traffic."

"It's a cool-looking action movie, carefully constructed and edited, that uses all kinds of nifty locations and a lot of portentous-sounding expositional yammering. It inhabits a Philip K. Dick-style universe of psychological warfare that suggests "The Matrix," "Total Recall" and "Minority Report" -- all of them, by the way, better movies -- but it's fairer to call "Inception" a maze movie or a labyrinth movie than a puzzle movie. Because, as the wisecracking fellow critic sitting next to me observed, every time the story gets puzzling the characters call a timeout and explain it."

"For all the complexity, craftsmanship and color of "Inception," it's yet another of his ultra-serious schematic constructions with no soul, no sex and almost no joy, all about some tormented dude struggling with his ill-managed Freudian demons. That same guy sitting next to me cracked that Nolan needs to stop seeing a therapist; there's not nearly enough sublimation in his movies."
Publicadas por Peacock a la/s 1:05 a. m.